Very recently I was talking to two women I deeply admire. Women who write and blog and speak publically. There was a time when I thought that I would do the same. I wrote often and blogged more than five times a week. I had something to say and thoughts I wanted to share.

And it was heartbreaking to me to realize that I don't feel that way anymore. I don't feel like I have things to say or thoughts to share. I'm not certain of myself anymore

I think I may have just lost my bearings. There was a geomagnetic reversal and I was left walking in the wrong direction. I got so turned around that I don't have a context for anything anymore. Things that should feel familiar have felt alien and frightening.

I was so embarrassed when I was listening to them talk about the things they were doing and that they wanted to do and what worked well for them. I was quiet and I smiled and felt ashamed. I was afraid they'd figure out that I'm a fraud. 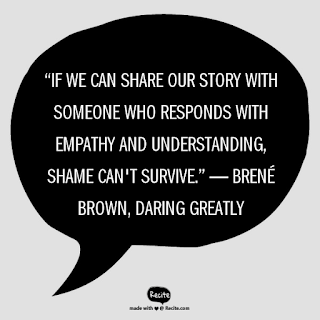 The more I think about it the more that conversation annoys me. Not what they were saying, but my own reaction to it. I've read enough (okay, I've read way too much) Brene Brown research to know that when you feel shame you have to confront it or it's just going to eat you up. Brown also said, “Shame corrodes the very part of us that believes we are capable of change.”

So, now I'm wishing that I just said, "Man I want to write more! Motherhood has really thrown me for a loop creatively and spiritually. I really admire you both and I really want to get back on track to being where you two are."

Why is that so hard to say?  Why on earth should I ever feel ashamed that I struggle with being a mom? I'm not completely sure, but I suspect that most mothers aren't practically perfect in every way like Mary Poppins. Most of us get tired and burn the candle at both ends and don't do as great a job at the work we want to do because we're trying to do a great job at being a mom, too.

I'll be completely honest and say that I'm equally ashamed that I haven't done more with my Storytelling degree. That's complicated because it's not just an art form that I enjoy; it's also a student loan debt that I am repaying and part of my identity that I allowed to atrophy because so much of my life was being pulled in other directions. I am an adjunct professor most semesters, but I don't make nearly enough to repay that debt and I'm not teaching storytelling.

There's far more to the story of my disorientation than that, but that story is reserved for a cup of coffee and a small, private audience.

It does little good to recognize your shame without addressing it, so I have a few goals:

1. Make an actual, concerted attempt at organizing a Story Slam at OC this coming semester.

2.  Write at least 6 blog posts before my birthday in September.

That's it. I'm not aiming too high for now, but that's mostly because I know my limits and I've been burning the candle at both ends and I know for sure that I don't want to do that again.

Posted by Chara
Email ThisBlogThis!Share to TwitterShare to FacebookShare to Pinterest
at 6/29/2016
Labels: motherhood, storytelling