When Jonah started school I hardly flinched.  Jonah is a social creature with lots of energy and he love to learn, so it seemed like a natural part of his life to send him off to school. I never cried because he was so happy to go. Like most kids he had some regrets a few weeks in, but after a few tearful days he got over them and threw himself into learning. 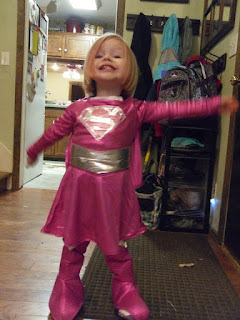 This morning was different. We purchased a new backpack and she had a new outfit and I did her hair. She had a lunch with a freezer pack and all the supplies were turned in yesterday. She chose her seat and she wrote her name "much fancier than anyone else's."  But it's different.

It's a humbling thing to have a child so much like yourself. Each new milestone brings back memories, but sometimes they aren't pleasant. I remember when and how I struggled and I watch her do the same thing. I see how she wants to please me and also how she wants to be herself. She doesn't understand that those are not two different things.

I talked to her earlier in the summer and I told her that we are very alike. I told her that we have a tendency to he a bit selfish and nervous about being around other people. Her eyes lit up and she was so excited. She wanted to be like me. Yet another way that having this child is so humbling.

I don't think there was anything that my mother could do to have made school easier for me. I simply didn't want to sit and do the things they wanted me to do. I'd rather read a book or explore the play ground or climb up in my tree and pretend I was someone- anyone- else. I'm waiting for the inevitable realization that her life is going to be taken up by mundane things. That there is not magic around ever corner. I'm mourning it already.

Last night I was filling out the paperwork for her teacher and there was a question on one of the forms. What do you most want me to know about your child?

I sat and stared at that question for a very long time. There wasn't enough space to explain Caroline. To explain all those worries I had. I wanted to say that I didn't want my sweet girl to lose her belief in magic, as I had when I was in school. I didn't want her to doubt how wonderful and special and beautiful she was. I wanted to say that she is one of my dearest treasures, so pleasepleasepleasepleasePLEASE don't let her be disappointed and broken and sad. She's vulnerable in a way that other kids aren't.

And I realize that every parent wants to say that, but in many ways, when I say it for Caroline, I say it for myself. I haven't cried yet. But I probably will.
Posted by Chara
Email ThisBlogThis!Share to TwitterShare to FacebookShare to Pinterest
at 8/13/2015